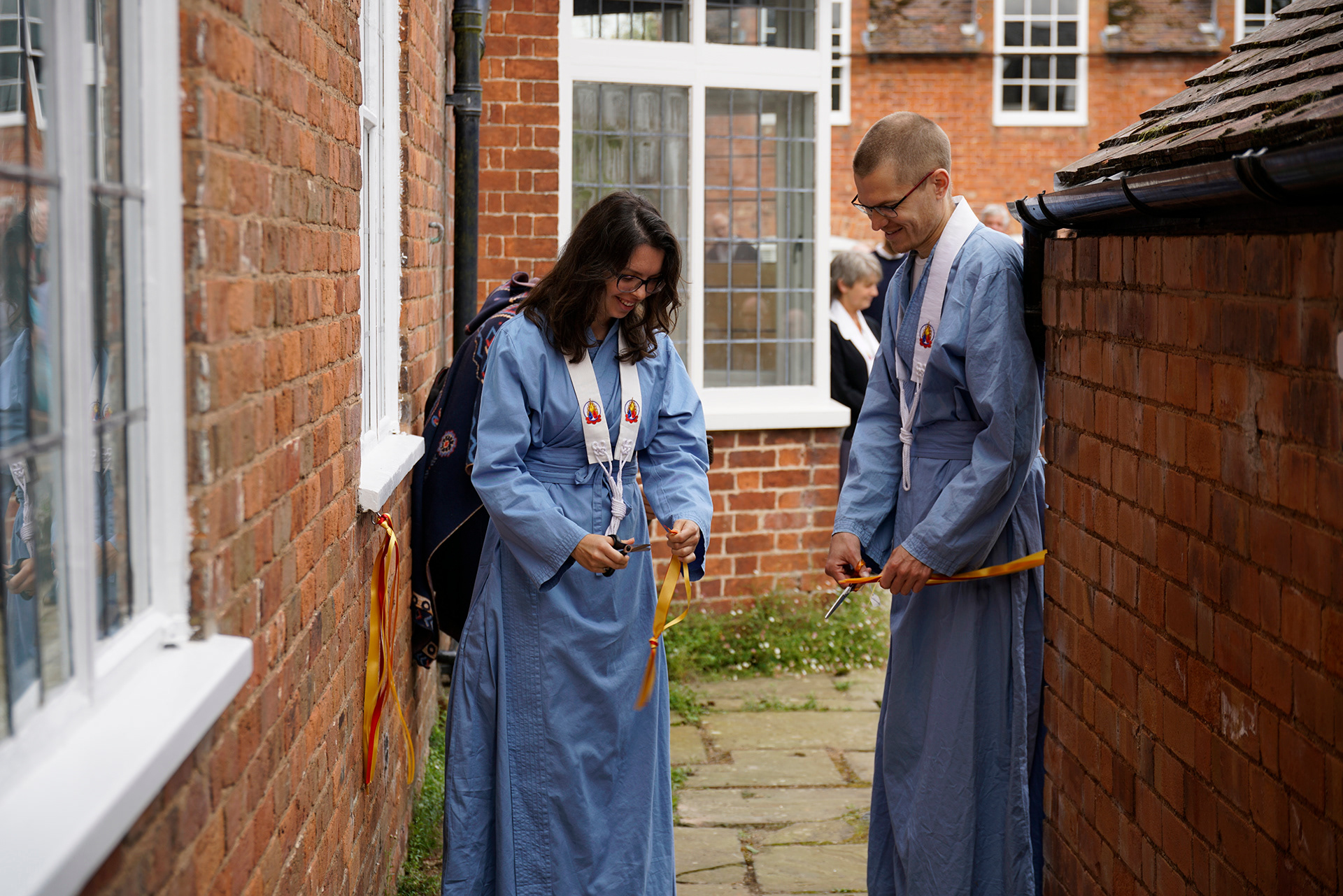 During the recent August Area Order Weekend, Urgyen House was opened to visitors with a moving dedication led by Saddhanandhi. Two new Order Members, Āryaniśa and Vilāsamuni, cut the ribbon to open the house officially.

This was Urgyen Sangharakshita’s home for 5 years, and his bedroom and living room have been left exactly as they were the day he died. So many will be familiar with the living room, as Bhante received visitors every day that his health would allow during the last years of his life.

The rest of the house has changed greatly. Throughout 2020 whenever it was possible to come, Mokshapriya could be found renovating – knocking down walls, laying flooring, painting, and receiving deliveries of display cabinets. He has transformed one room into a small shrine room where people can come to meditate, and this room has already been used several times for private ordinations.

The dining room has been transformed into an exhibition space, with the first exhibition on Precious Teachers open now. This exhibition displays treasures given to Sangharakshita by his teachers, each one shining new light on the spiritual friendship he had with some of the leading figures of 20th Century Buddhism: Jamyang Khysente Rinpoche, Dilgo Khysente Rinpoche, Dudjom Rinpoche, Dhardo Rinpoche, Kachu Rinpoche, Yogi Chen, Jagdish Kashyap, and Chatral Sangye Dorje. The exhibition can be viewed online here.

You can also visit Urgyen House in person when you’re here on retreat, or if you would like to come specially, contact the office to make a request.

Despite Urgyen House only opening six weeks ago, Adhisthana is already filling with stories of the significance of the place, and people’s experiences of visiting.

While attending the Manjughosha Sadhana retreat in September 2021, I visited Urgyen House almost every day. After a few days, I began to get a sense of why I kept wanting to go back. Being there was something of a guru yoga experience. After spending my initial visits enjoying reading about and taking in many of the fascinating objects and artifacts from Bhante’s life, I found myself just wanting to be there, to sit in his living room or stand in his bedroom feeling his presence and trying to open myself up to his influence and blessings.

I then had the impulse to want to read some of Bhante’s writings from within Urgyen House, sitting in the ready-made space with his complete works on the shelf above that is available for visitors. It felt closer to an actual experience of a direct communication from him as if something of his consciousness was floating in from his chair in the living room to blend with the words he wrote. My mind felt clearer, more receptive, and more emotionally ready to receive the teachings.

Thank you to everyone who has given their time, energy and love to make Urgyen House a reality. I hope to return many times.

The first time I visited Adhisthana (in 2017), I sang happy birthday to Bhante, met fellow Buddhists from all over the world, and asked for ordination.

4 years later, I returned as a new Order Member. This time I was showing people around Bhante’s last home, telling the story of how I just missed out on meeting him and asking for something else…

For me, an essential aspect of being ordained was aligning all my energies around being a disciple of Sangharakshita. I owe all my understanding of the Buddhadharma, directly and indirectly, to him. His life and work reveal an incredible amount of dedication and depth of insight. And yet, he is still relatively unknown in the wider world.

So I’m very pleased to be starting my new Order life working for the Urgyen Sangharakshita Trust, with the mission of sharing Bhante’s life and work with the world. In addition to the opening of Urgyen House – the beautiful exhibition space and preservation of his final home which Mokshapriya has masterfully designed and created – we’re building a new sangharakshita.org website that aims to do justice to his work and properly represent him online. This is paired with social media work, reaching out into the online spaces, introducing people Bhante through all sorts of media.

At the Order gathering, I was asking for donations to fund this work. We’ve raised most of our target, but are still fundraising. If you’d like to help our mission to share Bhante with the world, you can do so here.