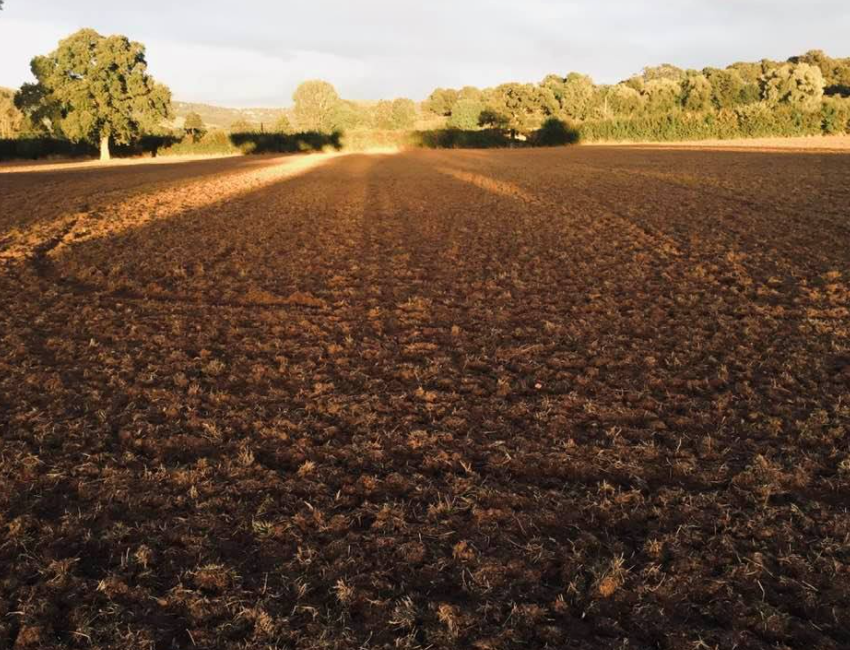 A Vision of Beauty

Over the last two weeks, half the main field at Adhisthana has been mown, ploughed, and sown with seeds.

The seed was harvested earlier in the year from the wildflower meadow in the swales field (which includes Yellow rattle), and the men’s Dharma Life course spent a work period tracking back and forth in the sunshine scattering the seeds from buckets.

Already you can see new green growth poking up out of the furrows of earth. In time, the field will fill with long stalks of grasses and flowers, a haven for butterflies and a very local source of nectar for the hive of bees immediately on the left as you enter the field from the car park.

Earlier in the summer the bees swarmed (they may have come out of the men’s community chimney) and landed on the hedge, and Sanghadeva managed to scoop them off into the hive beneath. No doubt they will be a great benefit to the wildflower meadow as it develops.

The meadow only covers half the field, so there is still plenty of room for camping, volleyball, large tent events, and our sheep friends when they come to stay.

In other parts of the grounds, the bounty of the gardens continues to be impressive. This summer we have had a great variety of berries, apples, damsons, and other fruit, as well as the vegetables grown by Aryajaya.

If you came here last month, you may have been stopped by a member the women’s community trying to give you some of our courgettes or green beans (which are still coming through in an abundance) or had Saddhaloka offer you some of our apples or Khemabandhu’s plum jam.

Many of the flowers we use on the shrine are grown here, and we hope to keep making arrangements from the foliage here throughout the autumn and winter months.

As the nights draw in it becomes rarer to see the kingfisher on the front pond, or the woodpeckers feeding from the bird feeder, but no doubt the hedgehogs will soon start making their presence heard in the leaves beneath the wisteria outside the shrine room.

Speaking to Sanghadeva a few months ago, I asked him about his vision for the gardens at Adhisthana. His reply:

“A garden is an attempt to show another world. There is another world, but it is within this one; it is through this world that we meet it. Beauty is a reflection of that other world.

People come up to me and they have tears in their eyes. That’s what they are bringing; reaching out to this other world. Beauty seduces you into another way of seeing forms, and a garden is dedicated to that, that’s what it’s trying to do, to show something.

The garden, through the sensory realm, attempts to expand or raise one’s levels of consciousness. It’s a metaphor for the spiritual life – taking mundane materials and creating beautiful patterns with symbolic meaning. Although gardens aren’t so symbolic, it is this same alchemical process. It is the same central drama of the spiritual life that is being played out.”

The English garden is known for its relaxedness – combining formality and informality (in contrast for example with the Japanese Zen garden). The ideas are less worked out, less strongly imposed, they are messier; the lines between nature and cultivation are more blurred. So too with the wildflower meadow – the plants will seed themselves, grow as they wish and yet the furrows mark the edges of this wildness. Form and emptiness, emptiness and form.

The gardens here will really come into their own when you get a sense of enclosure, entering different ‘rooms’ or spaces; going on a journey. Unable to see everything at once, the gardens will reveal themselves to you.

Each secret discovery may be echoed in another area of the garden, such as the Alamancia tree outside Urgyen House which speaks to those around the burial mound, or the small mound by the sunken garden, which as you look to the east is mirroring the Malvern Hills in the distance.

Thus each place within the grounds will contribute to a sense of place, of rhythm, and a unification of the whole.