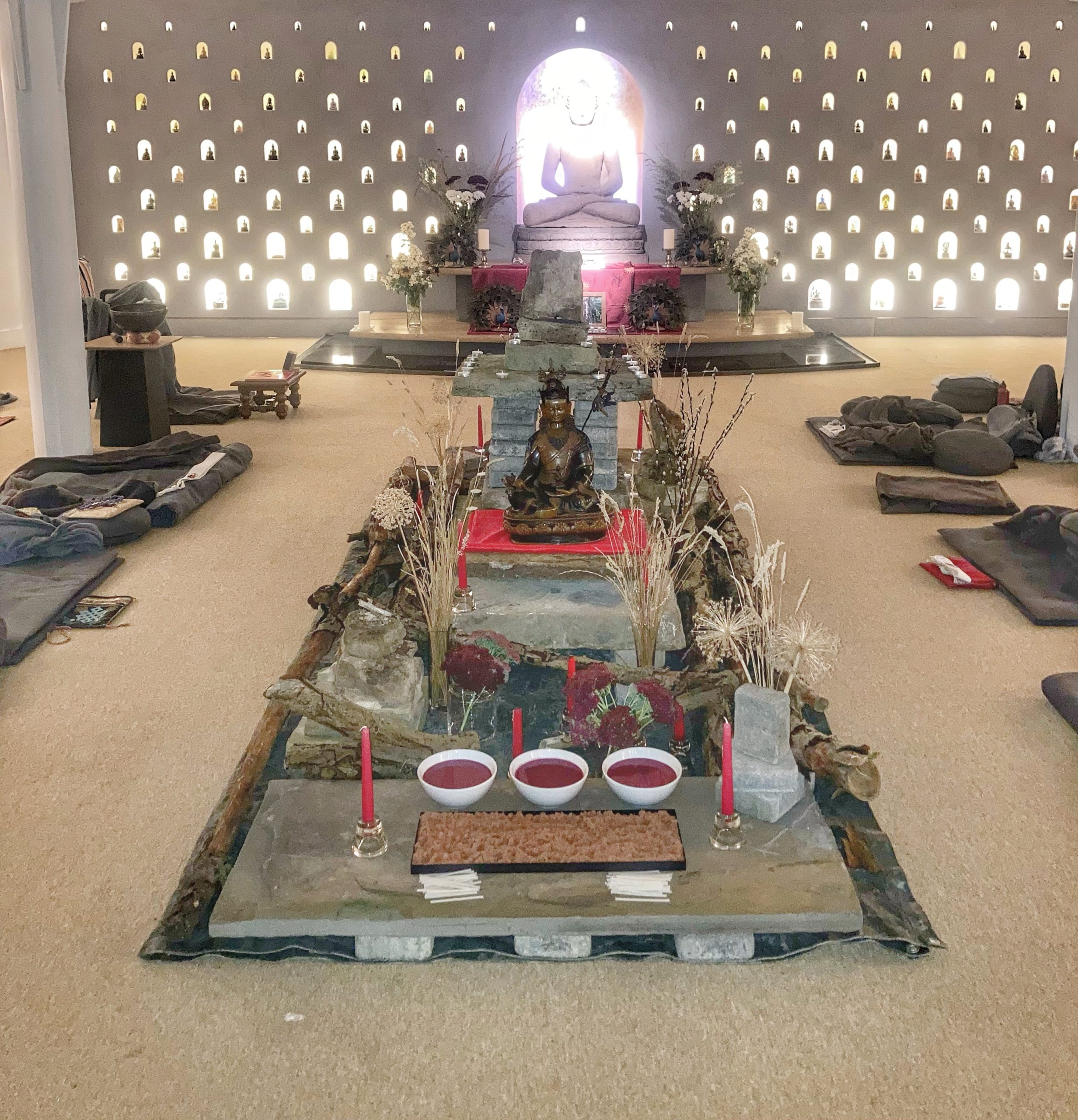 Building a Shrine to Padmasambhava

I was fortunate enough to recently attend the retreat led by Padmavajra on the life and liberation of Padmasambhava.

I’ve spent many retreats with Padmavajra over the years and on many of them I’ve been the shrine keeper. Over those years I’ve been able to craft my skills as a shrine keeper and learn much from Padmavajra about ritual, puja and shrines.

These days it’s a delight simply to have the combination of retreat time, Padmavajra leading and giving talks, time with Padmasambhava and shrine keeping.

The shrines for this retreat were all quite spontaneous in a way; myself and Padmavajra certainly hadn’t talked in advance or planned out what would happen. Really on retreats and in this context the shrine first and foremost is about tending to the three refuges; having that daily interaction with the representations of the three jewels, and making sure the offerings are fresh, beautiful and looked after.

On this retreat, we had the seven offering bowls with water offerings: every morning after breakfast (traditionally they would be done first thing before the morning sit) the old water was emptied away, and the bowls cleaned and refilled with fresh water. Any other offerings, flowers, petals, spent candle stubs or tea-lights from the evening puja or previous day are removed. It’s also good to sweep or dust.

The afternoons were spent working on larger transformations, where images or statues were changed or moved and the shrines were altered as deemed appropriate based on the talks given that morning.

Finally the evenings immediately after dinner would be to make any final adjustments; laying out tea-lights and candles for the right atmosphere and lighting for the puja.

All in all somewhere between three and four hours a day tending to the shrines.

For Padmasambhava retreats with Padmavajra, he has often commented and encouraged the focus to be on the beautiful and attractive nature of the guru, this being the best approach for practitioners of any particular Sadhana of a Buddha or Bodhisattva. It’s definitely something that I’ve always tried to draw out in the shrines throughout the retreat, with well laid out cloths that are clean and tidy, in pleasing combinations of colours and patterns.

If a certain figure is required on the shrine then I will always try to use colours in the cloths to relate to and draw out that particular figure. For instance when we had Vajrasattva on the shrine above Padmasambhava, I used a ground of pale blue and overlaid it with some white transparent floaty cloth. When we had an image of Kurukulla painted by Aloka then the shrine was very red; red cloths, candles and a lovely cascade of red satin ribbon piled up before her.

Early in the retreat during an evening puja session, Padmavajra mentioned the abundance of the guru and also the abundance of what we offer up. It set me off – I knew the Adhisthana treasury had peacocks I had made some years before for a large copper coloured mountain temple to Padmasambhava on a combined order weekend. In their abundant plumage, they linked in Amitabha who sits as the head of the lotus family – Padma’s family. They enriched the shrine for the rest of the retreat.

I definitely felt moved to offer something substantial that could emerge out of nothing, feel tangible and believable and then dissolve away again. With Satyakirti’s help, we built from great sandstone slabs and paving blocks a homage to the cremation grounds.

A key aspect was to have something “stupa” like in proportion to the beautiful statue of Padmasambhava. He could sit before it as though resting his back on it, in order to teach the Dakinis.

Believability is something I try to constantly consider if one is building something extra on or in the shrine room. Proportions definitely play a part in that, as well as what materials one uses.

Had I tried to make a stupa out of pots and pans and a plastic bottle and lashed it together with duct tape the believable nature would diminish. I could have used the perfectly formed plaster representation of a stupa from the treasury, but it is a fifth of the size of the Padmasambhava Statue – again it would not be believable.

In this, we have to learn the language and craft of the imagination and shrine work. For the evening puja on those days the taper candles dotted amongst the cremation ground were all red, in my mind they stood for Dakinis, stalking amongst the dead and flitting about in the dark shadows.

Finally (well almost finally) we had some time looking at Padma’s time in Tibet. What stood out from Padmavajra’s talks on this retreat and others was the crucial reason for his time there in the first place. All of the adventures, all of the teachings and strange goings-on with genies and demons takes place because the king of Tibet is trying to establish the Dharma in the land. They are building a monastery a temple, an institution, they are establishing a sangha.

I wanted to give this at least some kind of structure. In some ways, it’s also the easiest to represent without any preparation. I must say those paving blocks are terribly useful! And we added details, like only using the grey paving blocks and black slate for the roofs, and adding three roofs (as that was mentioned in the morning’s talk). Using some amazing red sand for the earth around the walls and building, and salt sprinkled against the edges of the roofs and tops of walls to look like snow.

And of course, everything needed to dissolve away as magically as it had arisen. I think for any retreat centre or festival shrine it’s really important that we learn to create wonderful, imaginative, well-executed shrines that also then dissolve away without a trace. Hopefully leaving all the shrine cupboards as clean and tidy, wax-free and clear of debris as we found them.